The OS/kernel in Urbit is called Arvo. Arvo is run inside a virtual machine called Vere - this is the urbit binary you execute in the terminal. You can also install a number of userspace applications such as Groups, Bitcoin, Studio, Pals, etc. Each of these layers—Vere, Arvo and apps—receive updates. In this guide, we'll look at how to deal with these updates, the meaning of the update notifications you'll get in Landscape, and how these layers depend on each other. 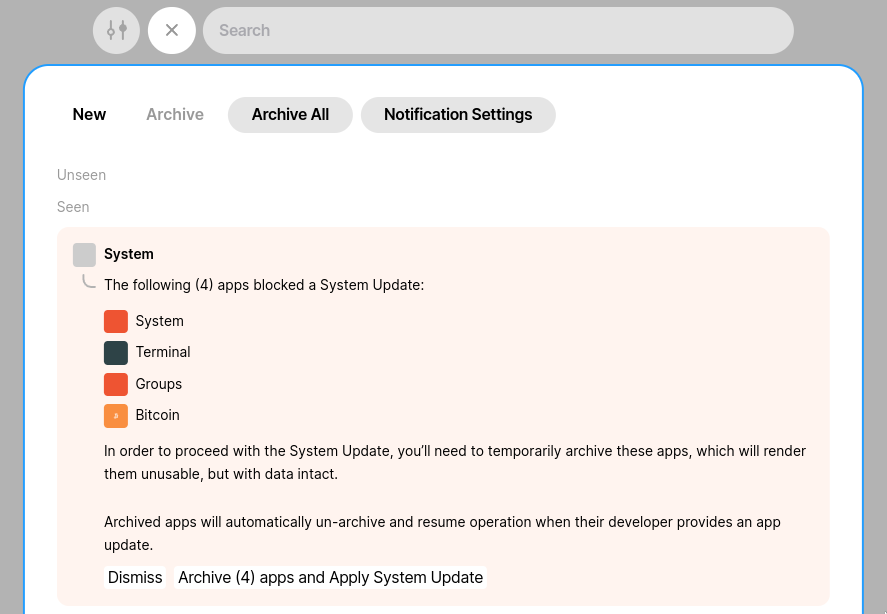 This means you've received an over-the-air kernel update, e.g. an update from [%zuse 419] to [%zuse 418]. The update could not be applied because the given apps are not compatible with the new kernel version, nor do they have compatible updates pending. If you hit "Archive (n) apps and Apply System Update", the blocking apps will be suspended and the kernel upgrade applied. Once the apps in question receive compatible updates, they'll automatically be updated and unsuspended.

If the blocking apps are important to you and you don't want to suspend them, you may want to hold off on applying the kernel update and wait to receive updates for those apps. You may also want to double-check you have automatic updates enabled for the given apps. See the app updates section below for more details.

App: "abc" is blocked from upgrading 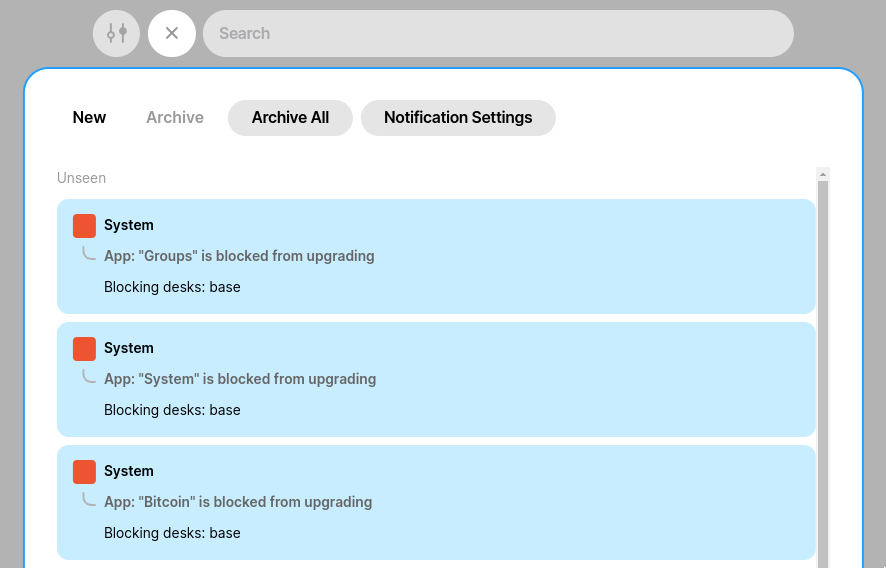 These messages happen when an app has received an update, but it's for a newer kernel version than you currently have, so it can't be installed. The update will be queued until the kernel is updated, at which point it will be automatically applied.

Such updates may be blocked because:

These kinds of messages don't usually require action. App developers will typically ship app updates ahead of the kernel update release, so you'll see these messages in the days before the release.

The runtime blocked a System Update

This means you tried to apply a kernel update, but the runtime (the urbit binary) is not compatible with the new kernel version. In this case, you'll need to update the runtime. See the runtime updates section below for how to do this.

As of version 1.9, the runtime has a built-in update mechanism. First, shut your ship down. Then, run either urbit next /path/to/your/pier or ./your/pier/.run next, depending on whether it's docked. When you run next, it'll check for an update, download it, and apply it. You can then start your ship up again. If the update fails, check that /your/pier/.bin/pace contains live. If it has once, edit it to say live and try running next again. Once you boot the ship back up after updating the runtime, you may need to run |bump in the dojo to apply any queued kernel updates.

If you're still running a binary older than 1.9, you'll need to:

To check the current version of the runtime, the first line when you start up a ship will say something like urbit 1.10. If you run the urbit binary without specifying a pier or other arguments, it'll also say its version at the top of the print-out.

Kernel updates are delivered in OTAs (over-the-air updates). For anything other than a comet, this should be automatically configured with your sponsor as the source. If you're running a comet, you may need to run |ota (sein:title our now our) to enable them.

Arvo (the kernel) uses kelvin versioning, which mean version numbers count down towards zero (therefore 418 is newer than 419). The version of the Zuse utility library is used to represent the kernel version as a whole. You can check the current version by typing zuse in the dojo.

The kernel requires that the runtime (urbit binary) is compatible with its current version. The runtime is usually backwards-compatible with old kernel versions, but not with new ones. This means if you're running an older version of the runtime, it will block kernel updates.

All apps you install (such as Groups, Studio, Pals, etc) specify the kernel version they're compatible with. If any apps have not received updates for the new kernel version, they will block the kernel from updating.

This means that both the runtime and all apps must be up-to-date in order to apply a kernel update. If either of these conditions are not met, you will be notified in landscape as described in the update notifications section above, and you will need to take the actions described.

If you have apps installed that simply don't have kernel-compatible updates available, you can force the kernel update by clicking the button in the notification described above, or by running |bump, =force & in the dojo. Doing so will suspend the incompatible apps until they receive compatible updates.

If the kernel update was blocked by an outdated runtime and you've since updated the runtime, you can tell it to try applying the update again by running |bump in the dojo.

To check if you have unapplied kernel updates queued, you can run +vat %base in the dojo (or +vats if that doesn't work and look for the %base entry). You'll see an output like this:

The updates entry says whether automatic updates are enabled. If it doesn't say tracking, you can run |ota (sein:title our now our) to enable them. The pending updates section will list any blocked updates, it'll look something like ~[[%zuse 417]]. The /sys/kelvin line says the version it's currently on.

Apps (such as Groups, Studio, Pals, etc) receive OTA (over-the-air) updates from their respective publishers. Automatic updates for each app should be enabled by default when you install them. Normal updates (those unrelated to a kernel update) should not require any user action - when you see the update notification in Landscape it's already been done.

Sometimes, app developers may not get a kernel-compatible update out in time, or else they have simply stopped maintaining the app. In this case, such apps will block kernel updates, and you'll see the "The following (n) apps blocked a System Update" notification described above. In this case, the app will need to be suspended in order for the kernel update to complete. You can do this either by clicking the button in that notification or running |bump, =force & in the dojo. You should not manually suspend apps via their tile menu or the |suspend command, because they will not be automatically revived if they later receive a kernel-compatible update.

To check the update status of an app, you can run the +vat %the-desk command in the dojo (or +vats if that doesn't work and look for the entry matching the desk name). It will give you a print-out like this:

If there are pending updates, it usually means they're waiting for a kernel update before they can be applied. The updates entry tells you whether automatic updates are enabled - if it doesn't say tracking you can run |resume %the-desk to turn them back on, or else run |install ~the-publishing-ship %the-desk.